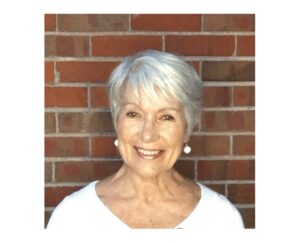 Laurie grew up in suburban St. Louis, MO.  She attended the University of Missouri and graduated from Washington University in St. Louis with a degree in English and Communications with a minor in History.  After teaching English and Public Speaking in high school for several years, she took an extended leave to be a stay at home Mom.

For the next decade plus, Laurie was actively involved in a variety of volunteer activities including:  The Junior League of St. Louis, The Arts and Education Council of St. Louis, Leader Trainer for Girl Scout Council of Greater St Louis, St Louis Tri Delta Alumnae (President),  Price School and Ladue Jr High School Boards (President).

Reentering the workforce, a love of History and Travel led Laurie into a new career in Travel and Tourism.  She attended classes at St, Louis Community College and completed the rigorous requirements to become a Certified Travel Consultant.  In 1991, Laurie made the decision to leave the agency to become a Regional Sales Representative for Keystone Resort and so began the Colorado connection.  Over the next 5 years, working for other companies, she expanded travel sales to Mexico, the Caribbean and Europe into an 8 state territory.

Laurie gave up regional sales and moved to Denver to become a Sales Manager for the Renaissance Denver Hotel in 1996.  It was a time of change on many levels.  DIA had just opened and both Stapleton and Lowry were at the beginning of redevelopment.  In the world of tourism, politics were involved as the state of Colorado had disbanded the tourism office.  History was in the making.

Laurie was appointed to represent Marriott International on the DIA Partnership Board, charged with attracting new investors to the Stapleton area.  She served on the Rocky Mountain Business Travel Assoc (RMBTA) Board as Program Chrm and represented the Renaissance on the Denver CVB Tourism Industry Partners (TIP).  In 1999, Laurie joined the Denver Convention and Visitors Bureau as Manager of Travel Industry Sales,  She served on the Board of Tour Colorado for 4 years culminating as President in 2001.  Nationally, she also served  on the Education Committee of the American Bus Assoc.(ABA).  Laurie joined the Apple Vacations National Sales staff in 2002 and retired in 2010.

In addition to The Lowry Foundation Board,  Laurie is also active in The Junior League several Alumni organizations.  Favorite activities for fun include: Travel, hiking, golf, skiing, music, theater, art and Broncos football.