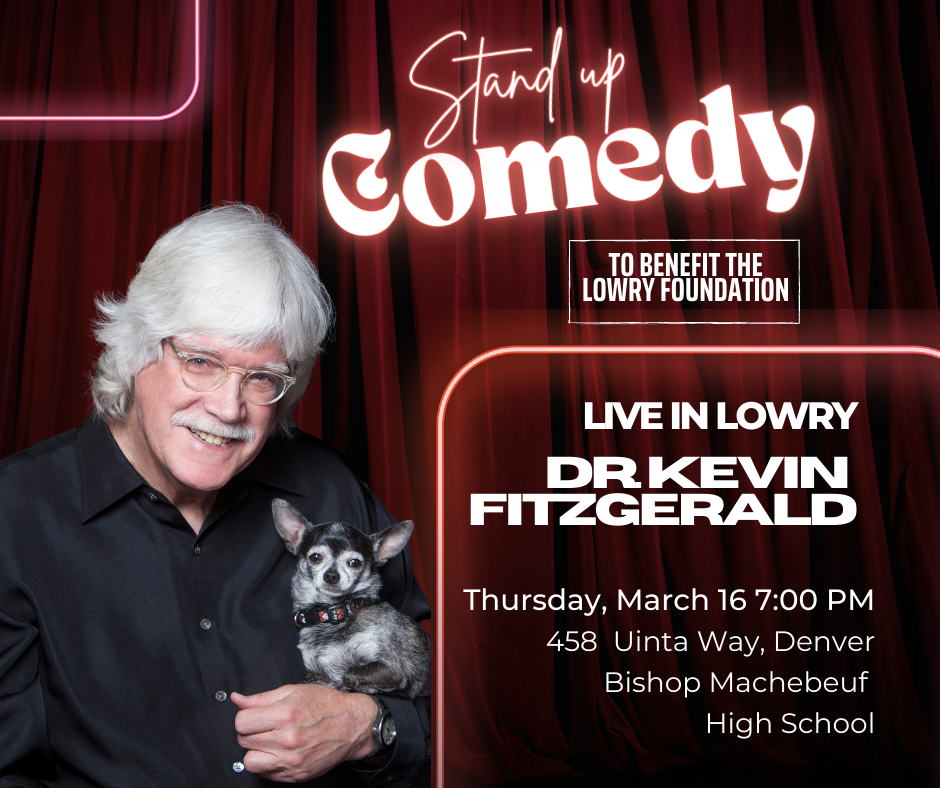 Tickets: On sale now on our website, scroll down on this event page, in person at the Eisenhower Chapel, or by calling us directly.

**By purchasing a ticket, you agree to the policies described below.

ABOUT KEVIN FITZGERALD: Dr. Kevin Fitzgerald has performed stand-up comedy and has been a staple of the Denver comedy scene since 1986. Kevin believes his unusual dual career as a doctor and comedian offers him a unique perspective on life. Kevin also believes none of us laugh enough. In addition to performing stand-up comedy, he will be sharing videos of his conservation/expedition work.

Since 1986, Kevin has opened for and worked with diverse and legendary performers like Joan Rivers, Bob Hope, Kevin Nealon, Brian Regan, and Norm McDonald. He is probably best known for his eleven seasons on the popular Animal Planet television series Emergency Vets. Other television appearances include The Late Late Show with Craig Ferguson, The Maury Povich Show, and The Today Show. Radio appearances include, The Howard Stern Show, one of the most popular segments ever of NPR’s Wait Wait Don’t Tell Me, as well as being featured on Paul Harvey’s The Rest of the Story. Dr. Fitzgerald put himself through school bouncing for various rock bands, including The Who, Willie Nelson, Parliament Funkadelic, and The Rolling Stones.
——————————————————————————————————————————————————————–

**Ticket Resale Policy: We do not recommend purchasing tickets from anyone other than us.

**Refund Policy: As a fundraiser for The Lowry Foundation, a refund will not be offered.

**Fraud Alert: The Lowry Foundation does not recommend any third-party website to buy tickets. To ensure you are getting a legitimate ticket, only purchase a ticket on our website, in person at the Eisenhower Chapel or by calling us directly. To avoid counterfeit, stolen, void or inflated tickets, purchase your ticket directly through us.