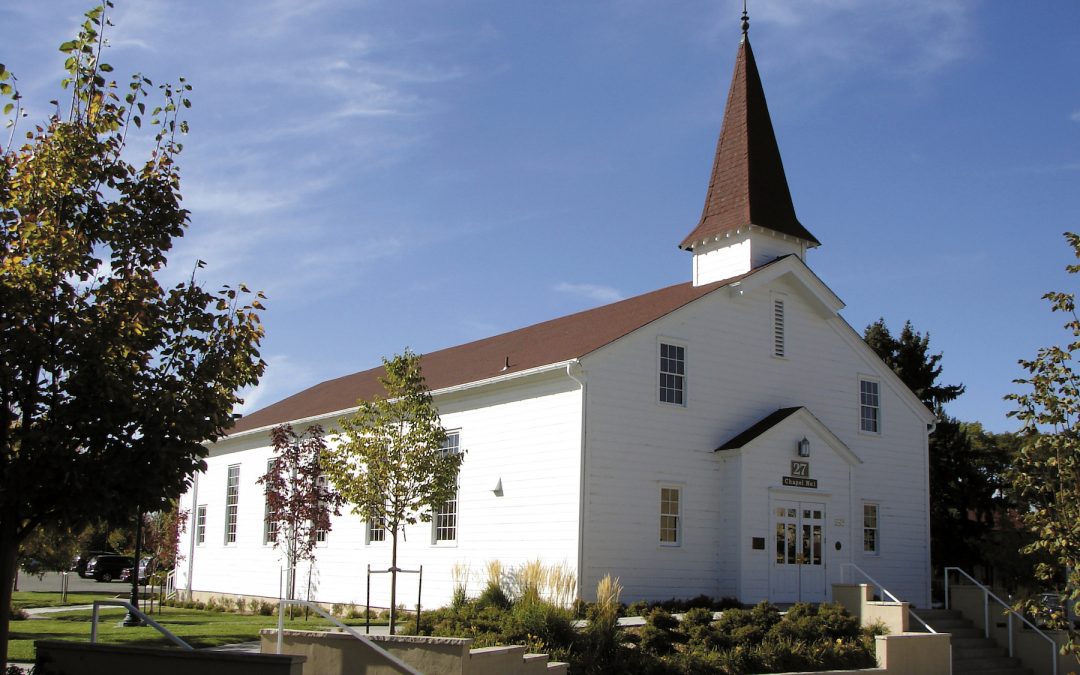 As architectural trends shift and transform its neighborhoods, the city of Denver and its partners work diligently to preserve buildings of historical significance. These buildings not only preserve Denver’s past, but also they help maintain the city’s unique character. The Lowry neighborhood’s Eisenhower Memorial Chapel is a perfect example of this ongoing effort.

On the National Register for Historic Places and the list of Denver landmarks, the chapel now sits among the restaurants and shops of Lowry’s Town Center. An integral part of the neighborhood, the chapel serves as a nondenominational community gathering place for concerts, speakers, and private events. According to the Evan Lasky, board chair of the Lowry Foundation, who operates the building, “Thousands of people visit the chapel each year to remember loved ones who served, celebrate important moments in their lives or attend community events.”

Dedicated days before Pearl Harbor in 1941, “Chapel No. 1” was saved from demolition for its historical and architectural importance. It was renamed the Eisenhower Chapel after President Dwight Eisenhower, who attended services with his wife Mamie and held meetings there during the summers of his administration. From 1953 to 1955, Eisenhower spent so much time in Denver that Lowry was designated the official “Summer White House.” The chapel is one of the few building that Eisenhower used during those summers that still stands.

Originally one of four, the Eisenhower Chapel is the last house of worship in Colorado that supported the expansion and mobilization of American forces during World War II. Under the pressure of international events and the creation of the prewar draft, the military built hundreds of simple-frame, tongue-and-groove structures, like Chapel No. 1, that were never intended for long-term use.

As is the case with most historic buildings, the chapel requires ongoing maintenance to ensure its preservation. Steward of the chapel since 2008, the Lowry Foundation recently launched a campaign to repair the exterior. The siding – made of pine wood lap – is in disrepair, needing $205,000 in restoration work.

As a result, the foundation has partnered with Historic Denver to secure a $105,000 Colorado State Historical Fund grant for a portion of this work. While Historic Denver will implement the project, the foundation will raise the remaining $100,000 needed to complete the restoration with sensitivity to the building’s history. Scheduled to begin in April, the four-month project will not impede on the chapel’s operations.

Past Efforts to Preserve and Restore

As part of the 2002 development of Town Center, the Lowry Redevelopment Authority, which owned the building at the time, rotated the chapel 45 degrees to make room for additional retail. As part of that effort, the chapel was placed on a new elevated foundation, and received plumbing and electrical upgrades. To make the main entry fully accessible, while maintaining the chapel’s historic integrity, the Lowry Foundation added a plaza with sloped sidewalks leading to the front door, in lieu of adding an attached ramp structure.

Architect Art Hoy, who has preserved buildings in Lowry for decades and is working to restore the chapel’s siding, says that past projects have only enhanced the chapel, “The military left mechanical ducts exposed in the ceiling, hanging from the beautiful wood tresses. It was distracting and unappealing,” he said. “We hid the duct in the crawl space, which was challenging, mechanically, but worth the effort, aesthetically. The interior of the chapel is a beautiful space.” According to Hoy, the chapel also received updates and restorations in 2003, including the addition of accessible bathrooms, a new entrance, fully restored windows, and new mechanical systems.

Spectrum project manager Graham Johnson, who is leading the upcoming preservation initiative, says to maintain the building’s integrity and minimize future damage, the siding needs replacing now. “We will salvage as much of the existing fabric as we can, carefully removing, repairing and reinstalling what we can save,” he said. “Our job is to make it look like we were never there. We will keep as much of the historic material as we can so that people can experience the same building that Eisenhower experienced.”